What is Tommy John Surgery

Tommy John surgery is also known as Ulnar Collateral Ligament (UCL) Reconstruction. When the stress of pitching or overhead throwing tears the UCL, Tommy John Surgery is the procedure to stabilize the inner side of the elbow.

The UCL is a thick triangular band found inside the elbow. It runs from the inner side of the humerus to the inner side of the ulna. It must endure extreme stresses as it stabilizes the elbow during overhand throwing. Over time, the UCL can develop tiny or large tears. The ligament stretches and lengthens to the point where it can’t hold the bones tightly enough during throwing or other activities.

The procedure is named after former MLB pitcher, Tommy John, who was the first player to undergo surgery in 1974.

Why is Tommy John Surgery Common in Baseball?

Baseball consists of many repetitive movements, making injuries common. Athletes who throw too hard, too early or too often without rest are at risk for elbow and shoulder injuries.

Pitchers are at a particularly higher risk of damaging their UCL. The rate of injury is highly correlated to the number of innings pitched, a number of pitches thrown, and time spent throughout the year spent pitching.

Symptoms of an Injured UCL

Pain during or after throwing is the most common symptom. The pain will often limit the ability to throw or decrease throwing velocity. A tear may sometimes feel like a “pop” after throwing followed by pain.

Conservative treatment is the first option for those who do not put much strain on the injured elbow. These treatments mayinclude: rest and ice, anti-inflammatory medications and/or physical therapy. For baseball players, Tommy John Surgery is chosen so they can return to their sport.

We strive to help baseball athletes stay in the game through injury prevention education. 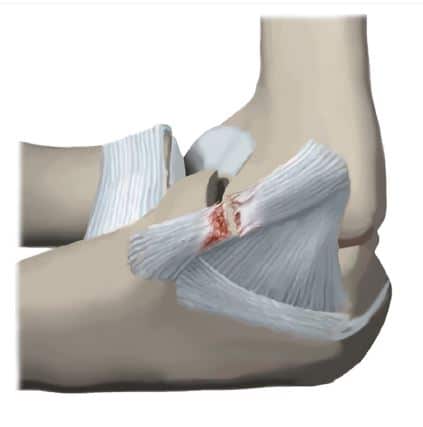 Hear What Our Patients Say!

Common Soccer InjuriesSoccer is an exciting, fast-paced sport where players must perform sudden acceleration, abrupt deceleration, rapid change of direction, jumping, and landing movements. The physical and fast-paced nature of the game puts players at risk for...

END_OF_DOCUMENT_TOKEN_TO_BE_REPLACED

Creating Value through High-Quality CareMisaligned incentives in healthcare continue to add barriers to care, but we remain focused on providing high-quality care. Sano was founded six years ago to reinvent how musculoskeletal care is delivered in Kansas City and...