An ACL Repair with an Olympic Impact

How does a local AOSM athlete impact the Olympics a world away? An international collaboration led to the improbable and successful return for two athletes suffering ACL injuries. A unique but effective ACL repair technique for senior football captain, Spencer Johnson, led to a similar return to play success story for star Slovenian skier, Veronika Verez-Zuzolova.

In June of 2016, Spencer Johnson was preparing for his senior year football season when he tore his ACL and his outside meniscus. Johnson consulted with a couple of different physicians who all told him his torn ACL would end his senior football season. Dr. Daggett mirrored those opinions, but after further discussion with the Johnson family, Dr. Daggett followed up with another option of repairing the ACL instead of reconstructing the ligament.

Currently, ACL tears are usually addressed through reconstruction surgery. ACL reconstruction surgery uses a graft of tissue, typically either the patella tendon or the hamstring tendon, to recreate a patient’s normal ACL. This graft is sutured in place, and recovery can take 6 – 12 months. An ACL reconstruction is now widely accepted as the “gold standard.” However, it is associated with re-rupture rates of 10-20% and return to play rates of only 63% in high school football. Using additional tissue from the patient in the form of a graft adds morbidity and complications to the procedure, including weakness and pain to the procedure.

ACL repair, on the other hand, maintains the patient’s native tissue and avoids the use of grafts. Repair may be associated with similar re-rupture and return to play results as reconstruction. This technique hasn’t been used until recently as the technology to perform a strong repair of the ligament was not available. ACL Repair was widely abandoned in the ’90s because the suturing of torn fragments together were not strong enough to handle loads of the knee. Now, the implants that we can use to secure the repaired tissue are much stronger and may provide significantly improved results. Return to sport is potentially less than reconstruction surgery with full release between 2-6 months.

The decision for ACL Repair

With significant technological advances in both the surgery and hardware used in orthopedics since ACL repair fell out of favor, Dr. Daggett had a compelling option in considering ACL repair for Johnson. Using these innovations to potentially repair Johnson’s ACL through standardized poke-hole incisions in the knee used for arthroscopy, Dr. Daggett successfully repaired Johnson’s ACL. The result? Less pain, shorter procedure, and quicker recovery.

After an intense physical therapy regime and just eight weeks after surgery, Johnson was cleared for non-contact practice. Johnson was able to start the first game on that summer Friday night and didn’t miss a game the whole year. In fact, his team made it to the state championship game due to the contributions of their senior captain.

Velez-Zuzuloza worked hard in an accelerated rehab program similar to Johnson. After two runs down the slope, Velez-Zuzuloza had not just participated in the Olympics only four months after ACL repair, she also finished 17th. An amazing accomplishment gave her recent injury. Enabling athletes to compete and do what they do best is the reason orthopedic surgeons love what they do!

ACL repair is not for everyone; more research is needed. The conditions and injury patterns of these athletes allowed for a unique approach. These successes have led Dr. Daggett and Dr. Sonnery-Cottet to use, in some patients, the ACL repair treatment more often. The two surgeons will be leading a multi-center, prospective international trial through SANTI to compare ACL repair to ACL reconstruction, which could have large impacts on the sports medicine community. 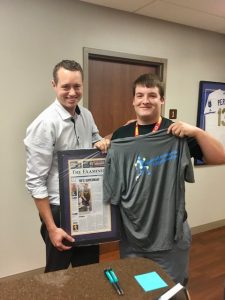 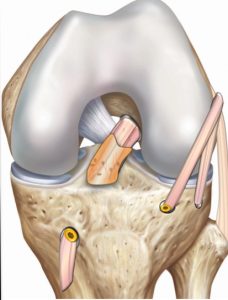